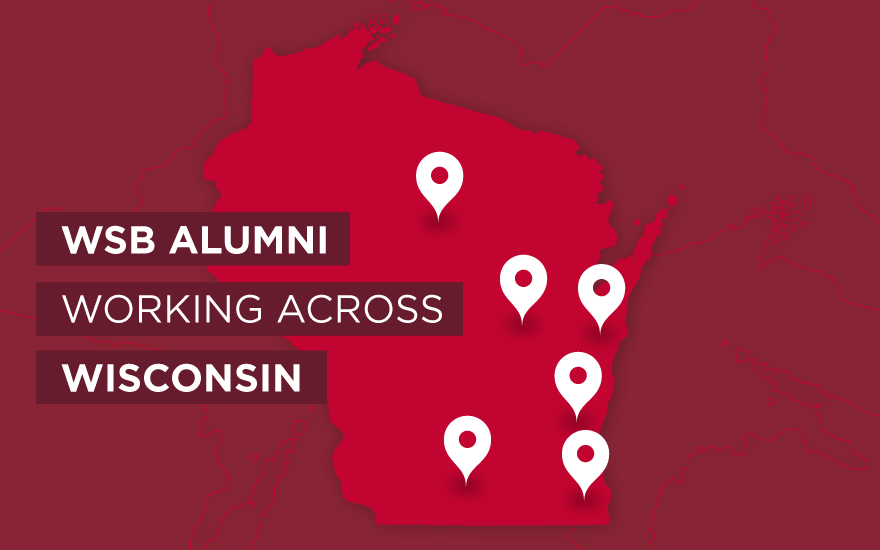 Wisconsin School of Business alumni are driving Wisconsin’s economy in industries and markets as varied as the talented individuals who are leading them. With more than 16,500 Business Badgers working and living across the state, Wisconsin benefits from their knowledge and experience today and will continue to benefit from their creativity and innovation in the future.

Ginseng might not be the first thing that comes to people’s mind when discussing crops that impact the Wisconsin economy, but William Hsu’s family enterprise gives the Badger State an international presence selling ginseng root and related products such as tea and supplements.

Hsu’s parents established the company in 1974, who found central Wisconsin to be the ideal place to cultivate ginseng, an herb prized by Chinese and other Asian cultures for its health benefits. His company has endured, innovated, and thrived in a challenging industry where many producers have shuttered operations. The company’s success can be the state’s success, Hsu says.

“We foresee an opportunity for local farmers to return Wisconsin to its preeminent position as the highest quality ginseng producing area in the world,” he says.

For nearly 20 years, children in Sheboygan have had a beautiful place to see books come to life and spark their imagination. Bookworm Gardens, a 3.5-acre botanical gardens based on children’s literature, came to life because of Sandra Livermore’s imagination and it provides a much-needed break from the distractions of the world outside the gardens.

Livermore was owner of a landscape design business when she launched the nonprofit attraction. There are 70 different gardens, each inspired by a different children’s book. Six thousand children visited in 2018 through field trips or camp programs and more than 80,000 people strolled through the gardens.

Excerpted and adapted from the Wisconsin Foundation and Alumni Association

Renee Moe went to college with a career goal of seeing the world. Instead, she works to change it. As the leader of the United Way’s Madison-based chapter that has more than $21 million in assets, she leads a nationally recognized organization that has continued to solve community problems despite the economic challenges of the past decade.

After earning a journalism degree, Moe further pursued her education with an MBA to expand her business knowledge and gain executive insights. The end result has been the chance to work across the public, private, and nonprofit sectors to make an impact in her community. “This is exactly where I’m supposed to be,” she says.

Peter Olesen (BBA ’09) always knew he could make a lot of dough when he grew up. Layers and layers of it, in fact, sometimes filled with pecans, cherries, or cream cheese. Olesen is vice president of O&H Bakery in Racine, the “O” in the fourth-generation family business best known for its signature item, kringle.

The circular Danish pastry is Wisconsin’s state pastry and demand for it continues to grow. So has O&H, and Olesen’s education and background in real estate and finance has helped him guide the company’s growth and strategy. That has included a 44,000-square-foot baking center that opened in 2016 and draws kringle lovers by the busload.

“We’ve been good about teaching team members how to bake,” he says. “Now we’re teaching them how to lead and to build a strong company.”

Al Sass is at the helm of his Berlin-based family business that annually processes more than 40 million pounds of mustard seed for products that are marketed worldwide. A double Badger, Sass earned his undergraduate degree in food science before returning to WSB five years later to earn his MBA—a degree that he says helped him “build a sense of strategy that enabled us to continue to grow the business.”

Wisconsin Spice began in an abandoned, 19th-century feed mill in 1973. When the family moved it to a state-of-the-art facility in 1985, its size grew tenfold, filling a 130,000-square-foot facility. Now the firm employs 80 people who process dry and prepared mustards and a variety of spices and spice blends.

Besides thinking and reaching globally, another key to success, Sass says, is developing and retaining a productive workforce. “Being in a niche product category, there aren’t a lot of mustard millers in all of North America. Employee development and promoting from within is crucial,” he says.

Excerpted and adapted from the Wisconsin Foundation and Alumni Association

Deanna Singh’s seemingly circuitous career path has a solid and consistent core to it: working to improve lives of marginalized communities. In Milwaukee and beyond, she has worked with nonprofits and in business to help find solutions to community challenges.

She’s been a CEO (of Milwaukee’s Burke Foundation), an entrepreneur, and an author. She wrote her two children’s books, I Am a Boy of Color and I Am a Girl of Color when she realized her own children weren’t seeing themselves represented in what they read.

Her new foundation, Flying Elephant, is spearheading an initiative for Wisconsin to be a hub for social enterprises—especially those with leaders from traditionally marginalized groups.

Alumni Features
« Back to news
Back to Top