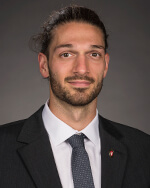 Keaton Nankivil attended UW-Madison from 2007-11, pursuing a degree in Kinesiology. While in school he was also a member of the men’s basketball team. He parlayed that experience into a professional basketball career that took him overseas to play for five years, living in four different countries. While overseas Keaton played at some of the highest levels in European basketball, competing for several championships in various European competitions. In 2016 Keaton retired from basketball and returned to UW-Madison to complete his degree. He graduated in 2017.

While finishing school, Keaton joined the venture capital firm Bascom Ventures as a venture fellow. He added immediate value to the fund, helping create a network of over 10,000 UW alumni in less than a year and contributing to diligence reports on investments across several industries. He was also promoted to the role of senior venture fellow with Alumni Ventures Group. This role allowed him to oversee marketing, recruiting, and data analysis projects for Alumni Venture Group’s fellow program. Keaton helped create and refine a recruiting program that allowed the program to scale from hiring 20 fellows per year to 20 per quarter helping it become one of the most active venture funds in the world over the last year.

For balance, Keaton loves to stay active in any way that provides a physical and mental challenge. He also seeks to learn from anyone with expertise in topics ranging from yoga, to cooking, to art or language. He is exciting to continue learning from his peers and highly experienced teachers in UW-Madison’s Nicholas Center for Corporate Finance and Investment Banking while pursuing his MBA.