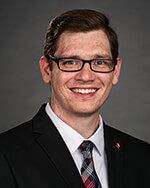 Joe Rohde graduated from the University of Wisconsin-Milwaukee in 2013 with a Bachelor of Arts in Psychology. After graduation, he accepted a position with UWM in the Transportation Services Department as an Office Operations Associate. In this role, he collaborated with various departments to satisfy the University’s transportation-related needs. He was responsible for front office duties such as helping customers with parking needs, assisting departments with transportation requests, and supervising student employees. He was pivotal in the creation of the International Panther Pickup, a program that coordinates the transportation of international students from the airport to their new Milwaukee residence. After one year in the front office, he was promoted to Project Coordinator for the Department and Fleet Manager for the campus. He was responsible for overseeing new technology and construction projects that were initiated by the Director. He also managed more than 100 fleet vehicles that the campus leases through the Department of Administration. After a year in that position, Joe took on a new role with the University as an Inventory Control Coordinator. There, he managed the inventory database, worked directly with vendors to address supply needs and coordinated with the trades departments to distribute inventory, both physically and electronically.

Joe has also dedicated an enormous amount of time and energy volunteering for the Archdiocese of Milwaukee Catholic Youth Ministry Basketball League, which is a Catholic basketball league for high school students. Joe has been volunteering for the organization for more than 10 years. He volunteered throughout high school at his home parish, helping to run the gym. After high school, he found his place as a head coach for six years and later as a Board Member for the League Oversight Committee.

Joe enjoys spending his free time outside, usually playing sports with friends or exploring new scenery either in the city or hidden in a park. Joe and his wife, Calli, enjoy traveling and hope to see a baseball game in every stadium in the major leagues. He also enjoys working out, cooking, and trying new restaurants. Joe is incredibly excited to begin his MBA journey at the Wisconsin School of Business in the Strategic Human Resource Management program.