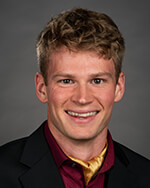 John Paul Bertinet graduated from the University of Wisconsin in 2012 with a Bachelor of Arts in Communication Arts. Upon graduating, he commissioned as a Second Lieutenant in the United States Army and spent the following four years as a logistician, serving in South Korea and Kentucky in various roles that included Maintenance Platoon Leader, Executive Officer, and Operations Officer. After separating from the military, John Paul decided to postpone his career transition to first pursue a lifelong interest in foreign languages by enrolling at KCP International Japanese Language School in Tokyo. Now returning to his alma mater to obtain an MBA in Brand and Product Management, John Paul is excited for the opportunity to pivot careers and reorient himself towards his original career ambition: driving children’s programming and creative media.

In his free time, John Paul enjoys exercising and is looking forward to becoming reacquainted with Madison’s many lakeside running paths. On days when the weather is less favorable, he prefers to stay inside and catch up on reading.