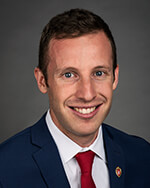 Benjamin Gordon graduated from the University of Wisconsin-Madison in 2014 with a Bachelor of Arts in Political Science and a Certificate in Integrated Liberal Studies. After graduation, he accepted a role at Creative Artists Agency in Los Angeles, where he was the assistant to the head of television. Following this position, Ben began working at Collab Studios as the business development coordinator, where he was project leader on dozens of influencer accounts and campaigns that paid out over $20 million to creators and content rights holders. After one year, Ben was promoted to manager of content partnerships, where his duties included helping mobile video creators convert pirated content into monthly revenue on YouTube. Ben helped to expand this program from Vine’s top creators to Instagram’s top creators and many of the world’s largest user generated content libraries. Ben would syndicate the content through Collab’s YouTube compilation network, which increased monthly revenue by exposing the content to over 500 million unique monthly views.

During his three years at Collab Studios, Ben also found a passion in real estate development. A licensed real estate sales agent since 2016, he has acquired and flipped multiple single-family and multi-family homes in the midwest and south. Outside of work, Ben is a board member on the Len Hill Charitable Trust. The trust makes large scale grants to help level the playing field for children and teens in underprivileged communities by supporting college access and career readiness programs.

Ben is also a licensed pilot and holds multiple airmen certificates. He is an avid Los Angeles sports fan, loves to travel, and has visited over 40 countries. Ben is excited to pursue his MBA at the Wisconsin School of Business Real Estate program and expand his knowledge of the industry.