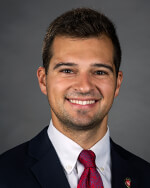 Michael Turco graduated from Ohio State University in 2015 with a Bachelor of Science in Chemical and Biomolecular Engineering and a Minor in Spanish. After graduating, he joined Deloitte Consulting as a Business Technology Analyst and served several clients across the Federal government. In his role supporting the CIOs of the two largest IT organizations in government, he used data to reengineer processes to increase IT operations efficiency and developed technology concepts and implementation approaches for new mission capabilities in response to policy and threat changes. On one project, Michael’s analytical approach to research and technical writing saved his client’s organization $30M annually by persuading agency leadership to change course on an IT acquisition decision. In addition, Michael developed the user stories, use cases, and the technical concept for a new system that modernized how five government agencies share data to expedite processes. He has also acted as the project manager for three technology integration projects. In addition to his client work, Michael’s industry analysis identified a new market opportunity for Deloitte to open a government and public services consulting office in Los Angeles, CA. Through his work at Deloitte, Michael has developed an understanding of the necessity for organizations to use technology to enable the modern business.

Outside of his professional life, Michael looks forward to his annual ski trip to the Rocky Mountains (he recommends Whistler Blackcomb). Michael enjoys spreading his love for sports in the community by coaching youth basketball, and he enjoys a simple Sunday morning with a cup of coffee and the newspaper. Michael began his career working with clients on the management side of technology, and looks forward to deepening his knowledge of both technology products and the technology industry. He will join the Wisconsin School of Business Center for Operations and Technology Management to learn to manage the development of exceptional technology products for customers.