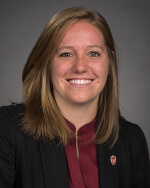 Grace Davis graduated from Carleton College in 2016 with a Bachelor of Arts in Cinema and Media Studies and a concentration in European Studies. During her time at Carleton, she developed her passion for film and television. After graduation, she accepted a position working as a production assistant for Sony Television’s episodic series, Outsiders. In this role she was named coordinator for all WGN Network behind-the-scenes and promotional electronic press kit shoots. Following the production of Outsiders, she accepted a role as an Executive Producer’s Assistant working on a feature-length film. This project allowed her to be heavily involved in the creative decision-making process, from preproduction to the wrap of filming.

While she enjoyed working in production, it was the opportunity to work for the Chicago International Film Festival as an operations assistant that changed her perspective and renewed her passion for non-profit arts organizations. This, combined with her previous experience working for the Bergstrom Mahler Museum and the Brussels’ Accessible Art Fair, reminded her of the myriad ways in which a single dedicated arts entity can impact its community.

As a Wisconsin native, Grace is excited to join the Bolz Center for Arts Administration at the University of Wisconsin - Madison, and officially become a Badger.