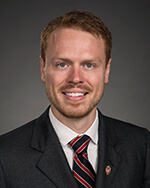 Max Maiken graduated from Beloit College in 2010 with a Bachelor of Arts in Economics. Music had always been a large part of his life so after graduation, he began working for the Beloit Janesville Symphony Orchestra (BJSO) and soon after the Beloit International Film Festival (BIFF) where he was the joint office manager. During this time, he chaired the Symphony’s Youth Engagement and Community Outreach Committee, and with BIFF Max created a film series event in conjunction with Beloit College’s Help Yourself program to involve at-risk youth in filmmaking.

Seizing an opportunity to perform abroad, Max moved to Brazil to tour and record with several bands and taught English as a Second Language on the side. Upon moving back to the States, Max landed a job at a Fine Arts Center in Arkansas where he worked on entertainment, educational, and community programming. Max then returned to the Midwest where he assisted in founding a media production company and continued to work with BIFF in its new efforts to collaborate with the Hollywood Film Festival. Max assumed the role of Executive Director of BIFF, leading it to see its largest film audience and economic footprint in the festival’s history. During his time in the arts, Max has used relevant data to creatively tell the story of an organization in order to gain support of grant funders, donors, and sponsors which sparked an interest in pursuing a degree that emphasizes analysis of consumer insights.

Outside of work, Max continues to enjoy playing saxophone and occasionally jams with friends, family and work groups. When not playing, he enjoys traveling and cooking, especially for a Brazilian churrasco. Max is excited for the opportunity to pursue his MBA at the Wisconsin School of Business A.C. Nielsen Center for Marketing Research to further hone his analytical skills and apply them in an impactful way.