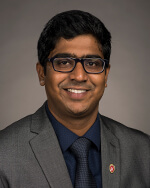 Santhosh Reddy Kosike graduated from Visveswaraya National Institute of Technology in 2012 with a Bachelor of Technology in Electrical and Electronics Engineering. After graduation, he accepted a role with Coal India Limited as a Management Trainee (Engineering) where he was involved in the operations and maintenance of electrical machinery of an underground coalmine (Jhanjra). In this role, he gained a hands-on understanding of the valuable relationship between Engineering and Material Management. After a year, he promoted to an Engineering Assistant Manager. During his three years as an Assistant Manager, Santhosh went to PR China to learn the underground mining technology and later he headed the electrical team of $60 Million long wall underground mining project and successfully commissioned the project in one year. This Project has a daily coal production of 7000 tons and accounts for an annual profit of $15 Million.  After promoting to Deputy Manager, Santhosh was involved in postproduction activities of the mine. He headed a team 30 members responsible for the successful transportation of 10,000 tons of coal every day from mines to customers. In this role, he gained hands on understanding of the logistics and supply chain part of the business.

Outside of work, Santhosh is involved in multiple extracurricular initiatives: a key member in Corporate Social Responsibility (CSR) Committee and the parijat club at Jhanjra, where he worked on a project where he organized children development programs in the nearby villages.

In his spare time, Santhosh runs, treks, and plays football and badminton. He is excited to pursue his MBA at the Wisconsin School of Business Grainger Center for Supply Chain Management to understand the nuances and the complexities of supply chain management and learn new elements with a focus on sustainable growth and efficient solutions.