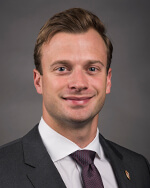 Rick Chopp graduated from Washington University in St. Louis in 2015 with both a Bachelor of Science and Master of Science in Mechanical Engineering, complimented with a minor in Computer Science. Following graduation, he began working for Triad Electric & Controls as a project controls coordinator on large-scale industrial construction sites around the country. In this role, Rick developed a strong aptitude for project management in a high-paced, schedule and quality driven environment. While at Triad, Rick worked on numerous cross-functional teams with a variety of different clients, suppliers, and colleagues. Rick was placed on four different projects throughout his years with Triad for clients such as Phillips 66, Burns & McDonnell, and Enable Midstream. He was promoted to lead project controls for two of these projects and every project Rick was placed on recorded profitability.

Rick continued to further advance his project management skills and also began developing his business acumen in a dual role in the Critical Technologies subdivision for Faith Technologies. At Faith, Rick joined the Hyperscale ($1B) Data Center Project Planning and Management Team as well as operating as an MBA Intern for the President of the Preconstruction division. He led the efforts on the approval and submittal process of $40M worth of material and had a critical function in the engineering conflict resolution process. Outside of his particular project, Rick took a lead role in an earned value analysis process for the 3D modeling business unit within Faith, and took on the task of automating a labor breakdown report for all projects across the company.

Outside of work, Rick stays active through fitness, sports teams with friends, and cycling and ski trips. He enjoys keeping up with the piano, a skill he learned growing up, and is always looking forward to planning the next vacation. Rick is excited to combine all of his background and work experience with an MBA in Operations and Technology Management from the Wisconsin School of Business. Tailored with certificates in Strategic Innovation and Business Analytics, this degree will further allow Rick to analyze and tackle complex business problems with strategic and continuous-improvement solutions.