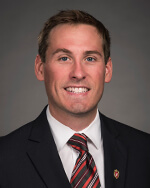 James Parke graduated from Miami University in 2014 with a Bachelor of Science in Mechanical Engineering and a minor in Chinese. After graduation, he accepted a role to take part in Schneider Electric’s Advanced Leadership Program. This fast-paced two-year program provided an opportunity to experience roles in multiple manufacturing environments, including materials analytics, quality and customer care, supervision, and manufacturing engineering. During this time James was able to work on multiple capital expenditure projects, including implementing a 180k materials process and handling train that delivered point of use components and evacuated waste into single stream recycling, allowing zero waste to landfill. He also worked in the stamping press department and worked on multiple projects that successfully reduced changeover times from 120 minutes down to 32 minutes. Not only was James able to show off his technical knowledge, he also had the opportunity to highlight his interpersonal skills through supervisory roles on all three shifts in the stamping and plating department.

James likes to get involved in the community outside of work, including Junior Achievement and Meals on Wheels. He is big into movies and sports, specifically ones based out of Michigan. Upon moving to Wisconsin, he discovered that he lives relatively close to a hot yoga studio, where he hopes to regularly bike to and attend.