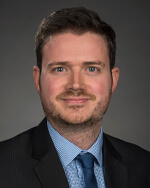 Luis Dominguez has extensive experience as an orchestra performer, chamber musician, and educator. He began playing the viola in his hometown, Sevilla, Spain, and later studied at the Amsterdam Conservatory of Music, where he earned his Bachelor of Music degree. He was then hired as section viola with the Guiyang Symphony Orchestra in China. As a member of the GYSO, he performed more than 50 concerts each season and participated in tours around China, Singapore, and South Korea.

In the field of Arts Administration, Luis was founder and manager of the Melkart Orchestra, an ensemble that gave musicians who are originally from the Andalucia region and are living abroad, the opportunity to play again in their hometowns.

Luis is excited to join the Wisconsin School of Business and the Bolz Center for Arts Administration. He is also excited to be one step closer to achieving his dream of building stronger and more relevant arts organizations and bringing music to places where it is not usually present.