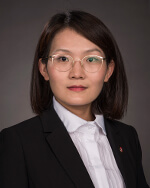 Ann Jiang graduated from Tianjin University of Commerce in China in 2011 with a Bachelor of Arts in English. Upon graduation, she accepted a role as project assistant/translator in company operating waterparks in Beijing. Although fun enough to work in a water park, this job was not challenging enough to her and she wanted to do something challenging and exciting. Back then, the fog and haze emerged as a big issue in China and she felt the opportunities in health products industry especially in the small city where those products were not known. So after carefully research, she left Beijing in early 2012 and took a gap year to help her mom started her own business by opening a store in the small city she was born in. In one year, she helped her mom founded the business while the health products turned out very popular in her small city just as she forecasted a year earlier. In 2013, she left her hometown and went to Guangzhou to chase more opportunities and challenges in her life. In Guangzhou, she grew from a secretary to an investment manager then to a high-level management assistant in Youngy Investment Holding Group not only because of luck and hard work, but also because of the potentials and abilities she developed and extended during the gap year that she pushed herself to go through. As investment manager or developer, she accumulated connections and relationships and then developed 1200 projects, made field trips to 165 companies, submitted 36 reports.

This was a step from zero to one! In this experience, she developed her potential and applied her courage while accumulated great experiences and connections in China investment industry. But as a girl who love to embrace changes and challenges, she did not stop herself from chasing more.

With the thirst for the knowledge of how to operate and grow a technology/manufacture company she might invested, she left Guangzhou for Shenzhen – the capital of technology in China in 2016 and worked as a general manager assistant in a joint-venture in IoT industry. Here she oversaw the operations of each department in the company and monitor key projects and solve problems, thus she saw problems and solutions that might happened in the real entity enterprise she might not understand merely through cold numbers in financial statement. This was an important experience for a girl who committed herself to becoming a successful investment manager.

Ann is excited to pursue her MBA at Wisconsin School of Business in CFIB specialization and thrilled about exotic life in USA. There she will further strengthen the knowledge in finance and hone the skills in general management. She is ready to rise to more challenges and opportunities thus making a difference!