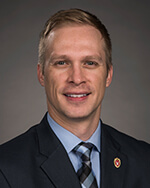 Dan Miller graduated from the University of Utah with a Bachelor of Arts in Marketing. Upon graduation, he accepted a position in industrial sales and distribution with Bisco Industries. In addition to gaining experience in supply-chain management, he received training in leadership and intra-departmental functions as part of a management training track. After one year, he targeted a new region, developing a customer base from scratch, resulting in the opening of a new branch. Soon after, he received a promotion to develop a new division in Utah. Dan later used his experience in B2B technical sales in positions with both Hewlett Packard and Dell.

Additionally, Dan spent 10 years in the 19th Special Forces Group in the Utah Army National Guard with a focus on Military Intelligence, including target analysis and tactical exploitation. While deployed to Afghanistan as a Special Operations Team-B leader, he gained experience in training and working with various military branch personnel in a dynamic and results-driven capacity. He deployed two more times to the Middle East as a Department of Defense contractor specializing in Counter-Insurgency operations, during which he focused on Special Operations and increased his experience in intelligence operations.

Outside of work, Dan prefers a good mix of activities including movies, watching and playing sports, and enjoying the outdoors. He also likes traveling, learning about different cultures, and spent two years living in Thailand during which he learned to speak Thai fluently. He looks forward to learning advanced business and leadership skills in his MBA program at the Wisconsin School of Business in the Center of Corporate Finance and Investment Banking, and to applying those skills in both work and personal capacities.