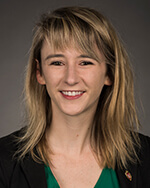 Vicky Schetelich graduated from Penn State University in 2014 with a Bachelor of Science in Hotel, Restaurant, and Institutional Management. After graduation she accepted a position with Aramark and moved to Southern California to join their Sports and Entertainment branch at the Anaheim Convention Center. As a member of Aramark’s Accelerate to Leadership program for recent college graduates, Vicky had the opportunity to learn from Aramark’s best managers and executives, and helped run catering for large corporate events.

After a successful year in the Leadership program, she was offered a position at the Washington State Convention Center in Seattle. Vicky happily moved to this active Northwest city, and joined her new Aramark team as a Catering Manager. In this role she was responsible for managing and coordinating assignments for 400 banquet servers, as well as executing catering operations and consulting clients through their events. After a year and a half of excelling in this role, Vicky was promoted to a Catering Sales Manager, where she worked with clients during the months leading up to their event. She owned and designed food and beverage agendas, menus, and budgets, and acted as the liaison between her clients and the rest of the Aramark team.

After two years in Seattle, Vicky moved to Madison, WI, and began working for a Start-Up company called AkitaBox. She joined their implementations team, and quickly found a surprising interest for working in software and providing services in the form of data and efficiency. Although a bit different from her past, Vicky was still able to use her knowledge of hospitality and event operations to succeed in customer relations and project management in the start-up technology world. She has gained valuable insight into a new industry, and had the opportunity to make a noticeable impact on a growing company.

In her free time, Vicky enjoys running, hiking, skiing, reading, cooking, and watching Penn State football games. Although she finds herself most often flying back home to New Jersey, her other favorite hobbies include traveling and planning vacations. She loves to explore cities across the country and world, including the new home that she and her fiancée have found in Madison! Vicky is very excited to begin her MBA program at the University of Wisconsin, and eager to take on new adventures!