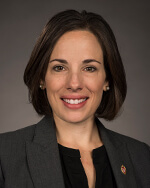 Mary Roberts is excited to join the Wisconsin School of Business and the Nicholas Center for Corporate Finance and Investment Banking, class of 2020.

In addition to having been an active professional musician in New York City, Mary ran her own business, an independent piano teaching studio, for about nine years. She launched the profitable piano studio from scratch, educating over 60 students and delivering over 10 performances during that time, and successfully transitioned the business from Brooklyn, NY, to Madison, WI. As a professional French horn player, Mary advanced to an elite level, performing on Broadway and with numerous orchestras in and around New York City. She is pursuing her MBA following this career in music, during which she developed a strong interest in business and finance through operating her small business, and through which she honed the skills of resilience, determination, and networking as an accomplished professional musician. Additionally, Mary worked in the public relations department at Lincoln Center for the Performing Arts in New York City. And prior to that, she served for two years as a corps member of Teach For America — New York City, during which time she taught first grade at an under-resourced school.

In her free time, Mary enjoys distance running, managing her family’s finances, and spending time with her husband and two young children.