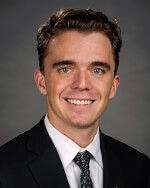 Peter Laskey graduated from Colorado College in 2014 with a Bachelor of Arts in Philosophy and International Studies. After graduation, he further developed his skills by enrolling in the University of Chicago Booth Summer Business Scholars Program; a summer program designed for Liberal Arts majors to gain experience in marketing, accounting, and finance. After Booth SBSP, Peter accepted a position as a Revenue Optimization Analyst at White Lodging in Merrillville, IN. In this role, he assisted the Director of Revenue of the company's extensive Chicago hotel portfolio with data analysis and special analytical projects. After learning the principles and systems of hotel operations, he was promoted to remotely manage a portfolio of 8 hotels in suburban Austin, Texas. Due to his success optimizing hotel revenue at White Lodging, he was recruited to be the Director of Revenue Management at the Kinzie Hotel, a 215-room hotel in downtown Chicago. In this role, he implemented an automated pricing system and increased RevPAR index in a competitive market by 2.2% within 12 months. Most recently, Peter assumed the role of the Director of Revenue for Bedderman Lodging, in which he directed the pricing and revenue of a 3-hotel portfolio in Chicago. During his time with Bedderman Lodging, he learned operational and revenue management skills for the growing alternative lodging and vacation rental sector.

Outside of work, Peter enjoys staying active through biking, basketball, and tennis. As a native of Indianapolis, IN, he is an avid fan of his hometown Pacers and Colts. He initially found his passion for hospitality by traveling extensively throughout the world and has been to 6 continents. He has a passion for food and culture and is working to become fluent in Spanish. He is excited to pursue his MBA in the Graaskamp Center for Real Estate to sharpen his financial analysis skills and bring positive contributions to the real estate development industry.