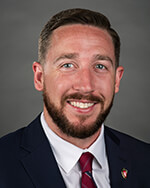 Andrew Johnson graduated from The Ohio State University in 2009 with a Bachelor of Science in Business Administration, where he was also a member of the varsity swim team. After graduation, he was commissioned as an officer into the United States Navy, where he has spent the last eight years serving in various challenging leadership roles.

His first two assignments were to the cruisers USS Antietam and USS Cowpens, where he served first as the Disbursing/Sales Officer, then as the Food Service Officer. He managed two divisions of sailors, received numerous shipboard qualifications, held several collateral duties, achieved his Surface Warfare Supply Corps Officer certification, and completed a western pacific deployment. His most fulfilling experience came while deployed and on duty as the Helicopter Control Officer aboard USS Cowpens, where his actions contributed to the delivery of 46,000 pounds of food, water, and medical supplies to the Philippines in response to Typhoon Haiyan.

After his time on the water came to an end, Andy spent nearly 5 years in the defense contracting realm. His final assignment in the Navy was as an Administrative Contracting Officer, where he supervised two teams in contract support for the DoD. Andy enjoyed the “civilian” lifestyle of this role, as it provided him more downtime to focus on his personal goals, get married, start a family (baby due in November!), and pursue his post-Navy career aspirations.

In his spare time, Andy enjoys staying active, hanging out with his family and friends, watching sports, catching up on movies and tv series, and spending time with his wife, Kristina.  He is extremely excited for his MBA journey to begin at the University of Wisconsin and start his transition into a new career in Brand and Product Management. After a challenging and rewarding Naval career, he is ready for the new adventure and plans to fully immerse himself in the experience!