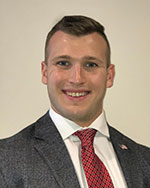 Daniel Rosenfeld is a distinguished graduate from the United States Air Force Academy, Class of 2020, with a Bachelor of Science in Business Management. Upon graduation from the Air Force Academy, he was commissioned as a Second Lieutenant in the U.S. Air Force. He was the sole Business Management student who received the Graduate Studies Program scholarship, allowing him to forego his immediate active duty assignment to pursue a graduate degree. During his time at the Air Force Academy, he committed his time to leading his peers. He was the Deputy Group Commander of Basic Cadet Training (second-in-command), the 6-week long summer training program that all Cadets must complete before entering their first year at the Air Force Academy. He commanded over 1,000 student instructors and over 1,000 Basic Trainees. Additionally, he was the Squadron Commander of Cadet Squadron 36, where he was responsible for 106 other Cadets and led them in daily military operations. Daniel also played football for the Falcons before an injury ended his career prior to his junior season. Throughout his four years at the Air Force Academy, Daniel excelled in balancing rigorous academic, military, and athletic requirements. He learned how to perform under a stressful environment, think critically, and care for the people that he had the privilege of leading. Having just commissioned into the Air Force, Daniel has a commitment to the military that he will have to fulfill following his time at the Wisconsin School of Business. After his journey in Madison concludes, Daniel will head off to Shepard AFB, Tx, where he will begin pilot training. He will be in the Euro-NATO Joint Jet Pilot Training program, with the end goal of becoming a fighter pilot for the Air Force. Daniel plans to transition into a career in finance following his military career. Daniel is a proud Texan, hailing from San Antonio, Texas. His parents are both Chicagoans, who have planted from birth, Daniel’s deep passion for the Chicago Bears. He loathes the Packers and takes pride in wearing Blue and Orange on Sundays. Daniel loves all sports, working out, fishing, being outdoors, and reading. Daniel is extremely excited to begin his journey at the Wisconsin School of Business to strengthen his skills in corporate finance and investment banking and further develop as a leader.