Giving the Gift of Self-Esteem

When they say “Diamonds Are a Girl’s Best Friend”, there may be a very good reason for that. Commercials often convey diamond jewelry as “beautiful”, “precious”, “rare”, “special”, and “incomparable”. What woman (or man for that matter) wouldn’t want to be associated with those qualities?

The enduring appeal of diamonds may have less to do with Hollywood and Madison Avenue ad gurus than basic consumer psychology. There has already been a considerable body of social science research to show that as consumers, we judge ourselves relative to standards set by other people. So knowing that we often evaluate ourselves in comparison to others, it’s really not hard to imagine that the objects surrounding us—the gifts we receive, the items we see in ads or purchase for ourselves—also have a significant impact on how we think about ourselves. 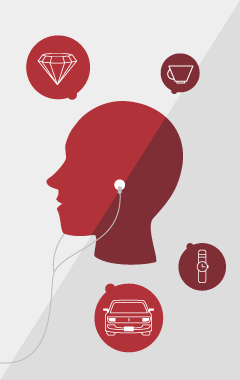 In a research study, we used a common object to see if consumers would consider their own traits and abilities differently when interacting with these items. We had two sets of 16-ounce coffee mugs, one tall and thin, the other short and thick. Participants in my study tried one of them, with half of the group being told they could keep the mug as a gift and the other half informed they would receive a different mug as a gift. Then, they completed questionnaires that evaluated how tall they felt and their overall physical self-esteem. It turns out that anything we own—or receive as a gift—affects the way we see ourselves. When we acquire objects, we unconsciously allow the traits of those objects to influence how we feel and even how we behave in a meaningful way.

Those who received the mug as a gift assessed themselves as having similar traits to the object, with those receiving the taller mug feeling taller and those receiving the shorter mug feeling shorter. But the exact opposite was true for those who did not own the mug—trying the shorter mug they didn’t receive as a gift led them to feel taller and those trying the taller mug felt shorter. And feeling shorter or taller, in turn, predicted lower or higher physical self-esteem, suggesting that study participants truly felt less or more positive about their physical appearance depending on which mug they tried and whether they owned it.

We see real-life examples of people taking on the traits of things they own all the time. Men going through a midlife crisis seem to opt for a sexy sports car. People seem to have a little more confidence and swagger in their step when wearing a fashionable new outfit for the first time because apparently when you look good, you feel good. Ownership of particular items can clearly have an immediate impact on our self-esteem.

Does that mean we have to up our gift-giving game to include more diamonds? Not at all. It might just mean taking a little more time to think about what we are giving and how it will be seen by the receiver. It opens up the very real possibility that in giving gifts, we have an opportunity to quietly encourage people to be more creative, generous, or honest.

In a variation of our mug study, Gita Venkataramani of Columbia Business School and I gave consumers a chance to interact with headphones. We didn’t opt for two sets of devices with different physical traits, but instead positioned one set as true and sincere, designed to reproduce sound exactly as in a recording studio. We branded the other set of headphones as somewhat deceptive and insincere, suggesting they were designed to artificially enhance the quality of the sound. All participants used the same headphones, with half owning them and the other half not owning them, as in the cup study. They were then asked to take a supposedly unrelated study, which allowed them to self-report on how well they did in a trivia game that rewarded good performance.

With Volkswagen recently engulfed in a scandal where the company was caught rigging the results of emissions tests on their cars, it may just be that long-time owners of those Volkswagen cars could find themselves engaging in some surprising behaviors. Perhaps they have started running more traffic lights or have been tempted to inflate an insurance claim. It may be because the car they’ve owned for so long has suddenly become a symbol of dishonesty and deception.

Whether shopping for the holidays or looking for gift for someone’s birthday or on some other special occasion, it’s easy to fall into the pattern of just going through the motions as a consumer and getting the obligatory gift for those close to us. But if we approach the process with some degree of care and deliberation, understanding that what we give may be unconsciously shaping the identity of someone we care about, it can be an important opportunity. A well-considered gift can make a meaningful and lasting difference in the lives of the people we love—and it doesn’t even have to be a diamond to have that kind of impact.

Liad Weiss is an assistant professor of marketing at the Wisconsin School of Business at the University of Wisconsin-Madison.

Marketing marketing research
« Back to blog
Back to Top