Household Wealth Via Business Ownership: Passing It On or Passing Families By? 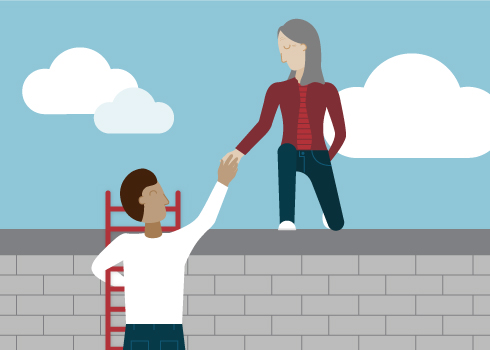 Danielle Steel, Oprah Winfrey, and Judge Judy Sheindlin. We all know these common names, so it’s hardly surprising to see them in Forbes magazine’s third annual survey of the richest self-made women in the U.S. Others on the list of women who have created their own wealth include Yahoo CEO Marissa Mayer, YouTube CEO Susan Wojcicki, and American Girl doll creator Pleasant Rowland.

While the self-made millionaire narrative seems to be an intrinsic part of our cultural makeup, the truth about wealth generation and wealth mobility in America is a lot less flashy. Keeping with the trend of the past 30 years, my research shows that much of American wealth is actually built through small, lesser-known family businesses.

In my recent work with Oana Tocoian of Claremont McKenna College, we look at the relationship between business ownership and wealth. More specifically, we want to know if businesses generate wealth at the household level. Does wealth create businesses or do businesses create wealth? Causality is a tough thing to establish, so instead we look at the broad patterns of how business ownership relates to wealth through intergenerational mobility—where children stand in relation to their parents when it comes to wealth.

What we found in our data is this: Business ownership and wealth go hand in hand, with some caveats. Seventy percent of the households in the top one percent wealth decile own a business. If their children owned a business, particularly in the same industry, they benefit as well. College-educated children of business-owning parents have no distinct advantage, however, if they work traditional wage-earning jobs. If the new generation neither owned a business nor finished college, parental business ownership did not automatically offer any pluses in wealth accrual.

Just what type of businesses are we talking about here? Contrary to the stories we hear in the media about visionary types like Steve Jobs and Jeff Bezos, the vast majority of wealth occurs in what we can refer to as “passable” businesses, meaning those entities that can be passed on to offspring and stay in the family. Rather than tech-driven and competitively innovative, these companies usually have a consistent product over time and require capital. Examples would be like a uniform company that supplies a number of different local hospitals or a family that owns a local trucking company. There’s sort of a turnkey operation that’s happening where family-driven wealth can be held onto and passed down through the generations.  The self-made, stratospherically successful are certainly a part of America’s wealth picture, but they are a tiny minority.

Here are a few more takeaways from our data:

So, where does that leave the notion of business ownership as part of the American Dream?

The findings thus far do seem to perpetuate an already-existing inequality. Without a “passable” business, poorer households appear to be shut out of business ownership entirely, with few exceptions. These patterns indicate that there’s room for improvement, that policy hasn’t done enough, and the barriers to business ownership for poorer households are yet to be uncovered. If incorporation leads to greater wealth, for example, why are poor households not incorporating in greater numbers? Is it a lack of information or some other reason?

But the data also shows a large degree of hope: when poorer households venture into business ownership and manage to stay there over time, they can find themselves among the most upwardly mobile and financially prosperous.

Sarada is an assistant professor in the Department of Management and Human Resources at the Wisconsin School of Business.

economics entrepreneurship management
« Back to blog
Back to Top