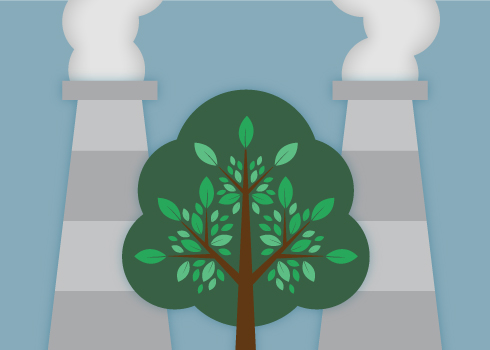 You’re a company manager looking to make your firm more environmentally sustainable. You reach out to schedule an assessment with a regional technical assistance program (TAP), a free-of-charge resource that helps U.S. companies make environmental improvements. The team visits, makes suggestions specific to your firm, and drafts concrete steps for greater sustainability that will also result in financial savings. Six months later, the project is completed.

Statistically, only 30 to 40 percent of TAP program ideas are implemented. If even 80% of the TAP projects were completed, we would see massive improvements in terms of air and water quality, not to mention the money companies would be saving. Sprint Telecommunications, for example, reported financial accruals in the hundred millions after carrying out various environmental improvements. So what is the mystery factor that seems to be holding these businesses back?

Together with my co-authors, Suvrat Dhanorkar of Pennsylvania State University and Kevin Linderman of University of Minnesota, I looked at manager attention as a driver of company decision-making when it comes to environmental improvement projects.

With multiple priorities at any given time, managerial attention can be in short supply. Time, personnel, funding—everything an organization does draws resources. In operations management, we call this a knapsack problem, a term borrowed from the military. As a manager, you’re constrained by the tradeoffs; you need to find the balance between packing the most critical items while still keeping your proverbial knapsack light enough to carry.

Unlike past research studies that looked at a project’s profitability or ranking on a list, we posited that manager attention wanders and a company can only sustain a limited number of projects at a time. As time moves on, the firm’s priorities shift to other areas, leaving the original initiatives behind, undone.

To test our idea empirically, we analyzed data sets from two state-level environmental assistance agencies in Minnesota: the Minnesota Technical Assistance Program (MTAP) and the Minnesota Pollution Control Agency (MPCA). We defined what we refer to as “supportive” tactics—TAP assistance—as well as “punitive” tactics, the fines or disciplinary measures given out by the Environmental Protection Agency (EPA) or other regulatory agency due to a firm being out of environmental compliance. In the broader sense, “supportive” tactics encourage change while “punitive” tactics coerce change. The data we looked at was comprised of more than 1,000 supportive environmental projects across 200 facilities that also received intermittent punitive measures.

Our findings showed that in directing managerial attention, the timing and sequencing of punitive tactics mattered in terms of project completion. If a company is hit with air quality sanctions by the EPA, managers will make that a priority fix. If TAP comes in afterward and suggests an air quality improvement project, the company is happy to do it since their attention is focused on improving air quality issues.

Conversely, we found that if TAP suggests a project first and the EPA comes in several months later with sanctions, particularly in sustainability areas unrelated to the project, managerial attention for the original project goes out the window. This kind of pattern can adversely affect implementation rates.

One factor that complicates the timing issue currently is the lack of collaboration between the EPA and the TAPs. While the two entities communicate, there is no formal coordination. We suggest that some degree of visit synchronization would improve the odds for implementation success.

We also found that firms that participated in “Touchbase Tuesdays” with their TAP contacts boosted their project completion rates from 10 to 20 percent. Each Tuesday, a TAP employee contacted the company’s manager to keep in touch regarding the firm’s progress. In our analysis, the follow-ups varied widely, from reaching out each week to a silence of several months. We found that the frequency of follow-ups was key to having higher firm implementation rates.

It’s easy to speculate about eliminating punitive measures altogether as a means to achieving greater project completion success instead of this “carrots and sticks” approach of the supportive and punitive dynamic. However, government should provide both. A lot of companies need a push, and the EPA as watchdog plays a critical role. It’s also important to have the two different kinds of work—auditing and supportive—carried out by different entities. You don’t necessarily want the same regulatory body performing both functions.

In the wake of the U.S. leaving the Paris accord and greater environmental leniency, many cities committed to bottom-up initiatives in order to accomplish their climate goals. Similarly, TAP gives firms the opportunity to fill in the spaces proactively, places where regulation hasn’t yet reached, and to come in post-sanction with initiatives that can enhance a firm’s environmental sustainability. In both cases, understanding how timing drives manager attention is the key to greater project implementation rates.

Read the paper “Promoting Change from the Outside: Directing Managerial Attention in the Implementation of Environmental Improvements”

Enno Siemsen is the Proctor & Gamble Bascom Professor in the Department of Operations and Information Management and the Executive Director of the Erdman Center for Operations and Technology Management.

leadership Operations and Information Management
« Back to blog
Back to Top