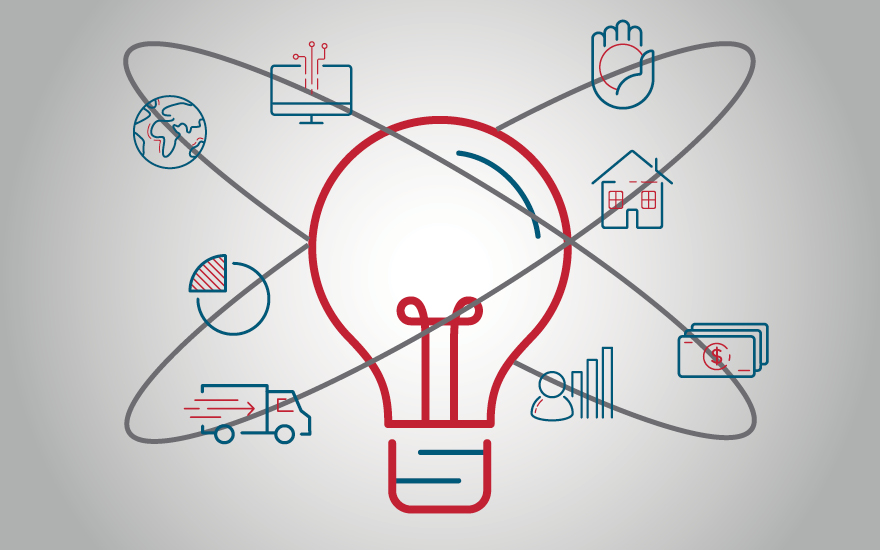 Where do research ideas come from? We tend to think of them as a single “a-ha” moment, but in academia, it’s often dedicated, focused work in one area for months or years that can evolve into a new and unexpected avenue of study.

We asked Wisconsin School of Business faculty to share the process that comes long before publication. Here are some of their responses:

Joann Peck, Irwin Maier Professor of Business and an associate professor in the Department of Marketing

“I was a Ph.D. student involved in an online study. People would call with comments, saying ‘I wouldn’t buy online because I couldn’t touch the product.’ I thought, ‘I wonder what research has been done in the marketing field on consumer purchasing behavior and product touch?’ When I looked, there was nothing, not a single study. So I started reading widely just to learn more about it. I do think it got more important as online shopping started to grow, but it was really that outside comment that spurred that stream of research for me.”

Fabio Gaertner, Cynthia and Jay Ihlenfeld Professor for Inspired Learning in Business and an associate professor in the Department of Accounting and Information Systems

“I’d say research ideas are inspired by curiosity. And then curiosity takes you places. When I started, I wanted to know how CEO compensation changes organizations. One aspect of organizations I find fascinating is that they all are subject to income taxes. Along these lines, my dissertation looks at how compensation affects corporate taxes. CEOs are usually compensated based on their firm’s profits, but because taxes are complex, some companies measure profits before and some after the effect of taxes. What I found is that compensation incentives can affect how much tax a company eventually pays.

From there I began to study factors that affect how much tax companies pay. As it turns out, a lot of it depends on how the tax law is structured, which led me to start examining proposed changes to the tax law. At the time I started, there were a few proposals gaining traction. Soon after I began working in this space, Congress passed the Tax Cuts and Jobs Act, which represents the largest tax reform in the U.S. in over thirty years! Such a large corporate tax overhaul has the potential to meaningfully impact the business environment, which made me want to explore the aftermath of these changes. I wanted to find out who were the winners and losers, and how the recent tax changes affected the global competitive landscape. In short, I feel like in research, you begin with a line of questions; and more often than not, as you learn about the answers, you start to have additional questions.”

Sarada, assistant professor in the Department of Management and Human Resources

“When I started graduate school, I wanted to study economic development. Why? Because I came from Singapore, which is a fascinating country that went, with no resources, from being a poor country to perhaps the third wealthiest country in the world. But what I found really interesting was that a lot of Singapore’s development came from entrepreneurship. The country had to get people to start creating companies, which means infrastructure, economic incentives, viable banking systems, and creating incentives for people to take risks. My focus began to shift toward entrepreneurship. I started working on a paper in Brazil about how businesses formed from existing businesses. Then my job market paper looked at how households took on risks, what were the risk-return trade-offs to starting a business versus working for a firm. So, naturally, the next question that arose was, to what extent are entrepreneurship and innovation linked, and to what extent are the inventor and the commercialization of that invention linked? That was really the beginning of it all.”

Yongheng Deng, John P. Morgridge Distinguished Chair in Business and a professor in the Department of Real Estate and Urban Land Economics

“I did very technical things early on in my academic career, like estimating the competing risks hazard model for evaluating the mortgage and asset-backed securities, a very technical econometric model, and, of course, aiming to get these studies into good economic journals. But in the second half of my career, I do more and more of what I think is relevant to the real world, and ironically, my research (citation) impact has been going up. Megacity challenges, housing affordability and sustainable development, climate change-induced risks and environmental concerns related to urban development—these may not sound nearly as sexy as what a newly minted Ph.D. who writes a lot of mathematical models is doing, but the fact is, we began to see more and more renowned academic scholars contributing their works to solve these kinds of critical issues.

Back when I was getting my Ph.D. at Berkeley, I was fortunate to work with two great people—my advisor, public policy professor John Quigley, and the renowned economist Daniel McFadden, who won the Nobel Prize in 2000 for his work on discrete choice modeling. However, during the past several decades, Professor McFadden has been working on the imminent challenges faced by our rapidly aging society—the economics of aging. That’s a real-world problem. Following my advisors’ footsteps, I began to look at the issues that our society cares about, that have a wider impact on our world.”