Football, Big Data, and the Nature of Cheating: A Q&A with WSB’s Evan Polman and Paul Hoban 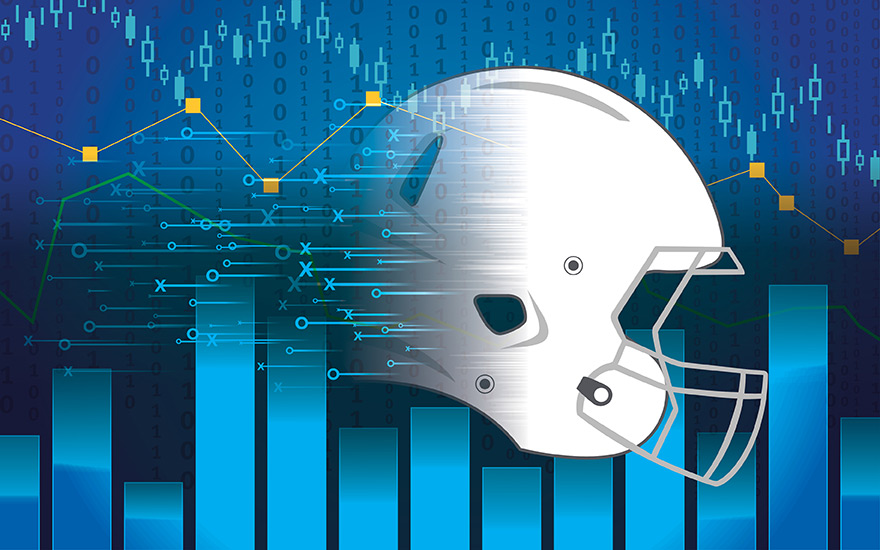 Polman and Hoban sat down with WSB to talk about their collaboration:

Polman: We used a number of psychological frames to get at this question, including “gain/loss” frames and “promotion/prevention” mindsets. A gain frame occurs when you’re hoping to obtain something, and a loss frame occurs when you’re hoping to avoid something bad. A promotion mindset occurs when you’re focused on gains, and a prevention mindset occurs when you’re focused on losses. Past research finds that individuals tend to demonstrate greater unethical behavior in a loss frame, as well as when using a promotion focus, and our study reflects that. But then we found an interesting crossover effect that has never been reported previously: promotion focus can mean more unethical behavior in a loss frame, while prevention focus links with greater cheating in a gain frame. And that’s exactly what the football data gave us with offensive and defensive players fouling more when their teams were losing and winning, respectively.

WSB: Tell us more about these framing sets, because it’s likely new to people outside the field.

For example, if you were to motivate or encourage a student to get good grades, you might think that if you tell them that getting A’s is a good thing, then this will motivate them to work hard and acquire A’s. This sort of message framing works for optimists, or promotion-focused people—they’re more motivated by the prospect of receiving A’s. But another way to motivate some students is not to say that A’s are a good thing, but that F’s are a bad thing. This message framing works better for pessimists or prevention-focused people—they’re driven to do well when they are motivated to avoid getting F’s.

WSB: Professional sports is such a unique setting for a study. What inspired you to go down this road?

Polman: I was working with Lyn and I had this intuition that there must be sports data that we could use to test our hypothesis, because gain/loss framing is something that we were looking at—which is something very useful to sports because of winning and losing, and the promotion/prevention mindsets reminded me of offensive and defensive players on a team. It seemed like it was well suited to be tested with football data.

WSB: This study is considered a cross-disciplinary study, because you’re looking at a large dataset with thousands of observations and explaining the patterns with a psychological lens and theory. Paul, tell us about how you got involved in this collaboration. The big data component lends itself to your expertise.

Hoban: I was intrigued by the psychological theory. Evan and Lyn had an observational study problem where they had gotten a really cool data set and completed an initial exploratory finding that included the crossover effect.

What was missing from that was a deeper dive: how do we show that this effect is robust? Because with any observational work, something else could explain the findings, besides the effects of gain/loss frames and promotion/prevention mindsets. It looked like there was a good opportunity to bring my methodological expertise, including big data techniques such as data mining and text mining, together with Evan’s and Lyn’s talents in psychology and understanding how these principles align, to advance knowledge in that area, because it was going to require analyses that are atypical in psychology.

Polman: I agree that one of the major contributions of the research is that it takes more of a big data approach to understanding the psychology of cheating. If it wasn’t for Paul’s contributions, it would have been a very simple and even unsatisfying paper because there would have been a lot of questions left open, questions begged by the research. But with Paul’s help, we were able to anticipate those kinds of questions. It is a uniquely valuable partnership because Paul’s area of research (big data analyses) is different from my own (psychology), and in this paper we were able to combine our areas. It’s a huge benefit, because there are lots of psychological insights to be made by analyzing large datasets.

WSB: Tell us more about the cheating aspect of the research and some of the constraints you experienced. Obviously, this is an area where no one is going to rush to self-identify.

Hoban: It’s one of the reasons I was drawn to our paper because it raises so many interesting questions about when and why people cheat, and there’s such a clean context from an observational data perspective. There are other factors that lead to cheating, but the frames and focus play a role and they have a very interesting interaction.

Polman: In the research that I do on moral psychology, where people test and measure dishonesty, researchers have to be very careful about not making it seem as though dishonesty could be detected in a science experiment. You have to come up with tricks that make participants think that their cheating behavior cannot be detected. What is great about our data is that the cheating behavior can be easily detected. There’s so much attention on a football game, so it’s just more realistic than what can be tested in a lab.

Hoban: I think another place where football really helps is in questioning whether it’s really cheating behavior. Or is it such an accepted part of the game that it’s not cheating? You can get into philosophical debates.

There are other sports where a violation of the rules is not considered cheating. Think about basketball: At the end of the game, what do you do if you’re down five points? You start fouling the other team. It’s such a commonly accepted strategy, it likely wouldn’t be considered cheating if you asked a coach. Those cheating behaviors become normalized because everybody accepts that it’s a strategic advantage. What else are you going to do, lose the basketball game?

Polman: The research does ask the question, what is cheating? It is interesting what people consider to be cheating and what they don’t consider to be cheating. I think that at first glance, the kneejerk reaction is that breaking the rules in sports isn’t cheating, because we’re desensitized to it. In every game, football or otherwise, we have referees because players are breaking the rules and we see it as part of the game. But I doubt that people would have that same kind of response to students cheating in college, despite it being not uncommon.

WSB: Along with the findings, one of the unique contributions of this paper is that it’s the largest study ever done on framing sets, is that right?

Hoban: I was honestly surprised by how robust this finding is. Normally when you do robustness checks (testing for alternate explanations to your findings), you frequently run into situations where you slice and dice the data so many ways that you can no longer detect the effects because you’re being asked to control for too many things. But in this case, the finding was always evident. As someone who does a lot of observational work, there are always at least a handful of areas where you have to admit, “I don’t know, because we don’t have data on that. While we don’t believe it’s likely, for whatever reason, it’s possible.” Here, we were really able to directly address a lot of those types of concerns because of the context of the data and the richness of the data. As Evan mentioned earlier, I cannot think of an alternative explanation for our finding, and we pushed hard to do precisely that.

Polman: I think there are many ways in which the paper could have an impact. Our work contributes to the separate literatures on moral psychology and sports psychology. However, the primary impact could be that our paper is a rare example of extracting psychological insights from big data—a trend that is increasing nowadays because of the prominence of big data. I hope that our paper can be seen as a model paper for the fruitful partnership between psychologists and data scientists.

Read the paper: “Harbingers of Foul Play: A Field Study of Gain/Loss Frames and Regulatory Fit in the NFL,” (PDF) published in Judgment and Decision Making.

Evan Polman is an associate professor in the Department of Marketing at the Wisconsin School of Business.

Paul Hoban is an assistant professor in the Department of Marketing at the Wisconsin School of Business.

Marketing
« Back to blog
Back to Top