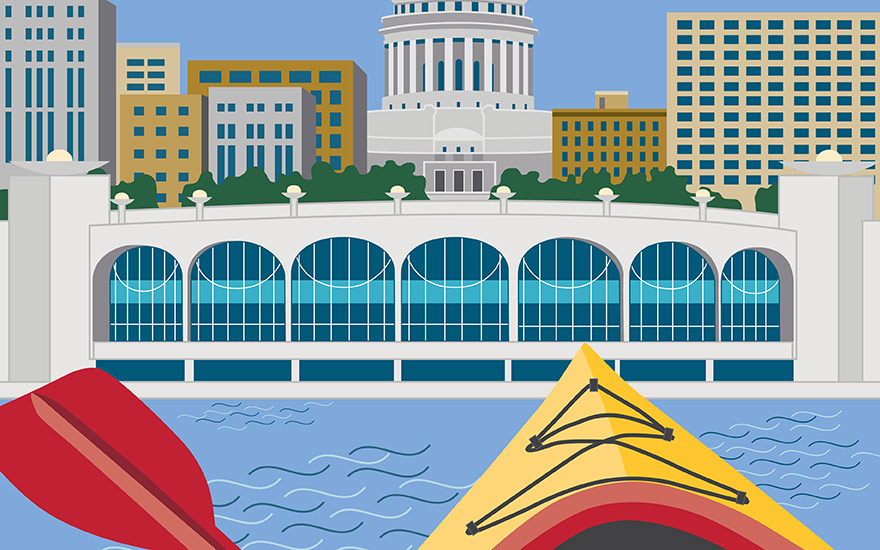 That favorite nature trail you run every weekend? The more you feel like it’s yours, the more you’ll look after it, a recent study suggests.

Joann Peck, associate professor of marketing at the Wisconsin School of Business, and her co-authors found that individuals who felt a sense of “psychological ownership” toward a public good—feeling as if they owned the space even though they did not in actuality—felt a greater responsibility to take care of it and therefore tended to exhibit positive stewardship behaviors.

The study examined psychological ownership across four studies; two were lab studies and two were in outdoor environments, including kayakers at a public lake, and skiers at a state park. It was published in the Journal of Marketing, with co-authors Colleen Kirk of New York Institute of Technology, Andrea Luangrath of the University of Iowa, and Suzanne Shu of Cornell University.

A central premise of the study is that individuals don’t need to legally own something in order to feel a sense of ownership, a finding Peck and Shu arrived at through earlier work.

They explored doing a study using private goods like rental cars or hotels, but ultimately settled on using public goods. “We decided what was most interesting is the fact that you can take a public good and increase individual ownership over something that clearly you can’t own.”

In the kayaking experiment held at Madison’s Lake Mendota, half of participants were asked to give the lake a nickname before heading out unaware of the planted trash in the lake. The study found that the individuals who did come up with a nickname demonstrated a higher degree of psychological ownership which extended to stewardship behaviors of picking up the trash in “their” lake.

“[This research] suggests that even small, simple interventions can make people really care about these public resources and that such actions have the potential to make a big difference.”

In another of the studies, Peck and her co-authors used signage to gauge participants’ psychological ownership, testing two different signs—one that read, “Welcome to the Park,” and another that read, “Welcome to Your Park.” Simply adding the pronoun “your” made a significant difference in boosting feelings of ownership, Peck says.  “We also measured responsibility and found that an increase in ownership leads to an increased feeling of responsibility for the park. This responsibility led to care, with both intentions to pick up trash in the park and make a donation to the park.”

Peck’s team found that greater psychological ownership could also extend to financial stewardship, motivating individuals to give money to the upkeep of a public space. In the state park ski study (held at the Lapham Peak Unit of Kettle Moraine State Forest) employees handed visitors a park map during the ski rental process. Half of the skiers were asked to plan their own path using the map. Employees then gave visitors the option of donating a dollar to the park during checkout. It’s a process that is not only simple for the park to implement, Peck says, but it makes visitors more likely to give money back because they now feel more ownership after designing their own trek.

Even though Peck’s study was completed prior to the COVID-19 crisis, it has turned out to be unexpectedly timely. “During this pandemic, people are spending more time outside enjoying public areas, which is a positive,” Peck says. “The problem is, we then also tend to have more litter issues, and with decreased funding, there are fewer employees to help steward those public spaces. So, our work is particularly relevant right now because we’re looking at very low-cost ways to heighten feelings of ownership that will impact how people treat common goods.”

The study may have broader applications that have yet to be explored. Peck was recently invited to be part of a team that looks at issues around plastics, waste, and oceans; her role will include examining stakeholder responsibility as it relates to the sense of ownership.

“One of the reasons I am excited to share this work is that the findings are easy to implement,” Peck says. “It suggests that even small, simple interventions can make people really care about these public resources and that such actions have the potential to make a big difference. It’s nice to do research that matters, that helps make the world a better place.”

Read the paper: “Caring for the Commons” published in Journal of Marketing.

Joann Peck is the Irwin Maier Professor of Business and an associate professor in the Department of Marketing at the Wisconsin School of Business.

faculty insights Marketing sustainability
« Back to blog
Back to Top