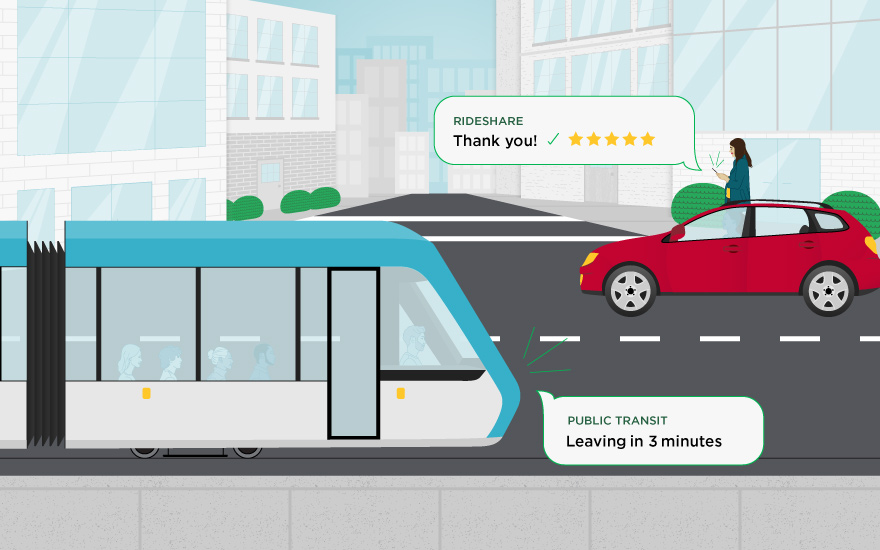 Launched in 2009, Uber may be young in years compared to several decades of public transit, but its impact has been nothing short of disruptive.

A new study by Yash Babar, assistant professor of operations and information management at the Wisconsin School of Business, and co-author Gordon Burtch of the University of Minnesota, finds that Uber’s existence tends to decrease city bus ridership by 1.3% while increasing commuter rail use by almost 3%.

An expert in the sharing economy and technology-based interventions, Babar talked with WSB about these findings.

WSB: What sparked your interest in this line of research?

Babar: Much of the Uber research thus far has focused on areas like drunk driving, gig work in general, and unemployment. But its impact on transportation policy has been understudied. That led to my curiosity about what it is doing to current transit structures. What does it imply to take an Uber—are we then taking away from public transportation? My interest also started a few years ago when several transit agencies started partnering with Uber. These were pilot programs where you could use your bus pass to pay for your Uber ride, for example. The number of these programs increased drastically between 2017 and 2018. But even if you don’t have any of these special incentive mechanisms, we were curious to explore what people are doing naturally. If I don’t give you anything, how would you use Uber in conjunction with public transportation?

WSB: The study’s findings suggest that city bus use goes down with Uber’s presence in a metro area. And these findings hold on a national level, so it’s broader than just isolated effects for one city.

Babar: Yes, that’s correct. We saw a 1.3% decrease in city bus ridership on average, and that really fluctuated depending on factors unique to each city. We witnessed the biggest drop in the Las Vegas metro area—nearly 8%—which translates to an almost $5 million annual projected loss or roughly 400,000 trips each month, assuming as many buses are run for as many hours as before.

In our analysis, we used a “technology substitution/complementarity” lens, which examines what situations were people in when they selected Uber instead of public transportation. Some of the contributing factors we were seeing across the different cities were related to weather, crime, gas prices, or a lack of public transport options. If it’s raining, for example, you may be more inclined to take an Uber to get to the train station rather than standing outside waiting for a connecting bus to get you there. Or maybe you’re using an Uber because there’s no other public transport option at that particular time and you don’t feel safe walking to your car. We’re looking at the gaps in public transportation where Uber or another ride-hailing company is coming in to fill them.

WSB: Do you think we will eventually see the day when Uber or some other ride-hailing company takes over public transportation’s role entirely?

Babar:  You’ve got to be careful because transit needs to be inclusive. It cannot be a completely free market, because public transportation needs to serve a diverse population. It needs to provide access to jobs, access to food services. Longterm, if we start thinking about using ride-hailing to substitute for transit, it’s going to be a problem because we know from prior studies that some Uber drivers have refused to go to black neighborhoods after a certain time of day. It’s the free market; you can refuse to take a ride based on who you think the rider is going to be and where you think the ride is likely to go—there are drivers who do that. There are also mechanisms on these platforms to bump off drivers who keep doing that.

WSB: What are some of the policy implications of your study?

Babar: Transportation economics is a really big field. Even though transit behavior has been studied since the 1960s, now there’s spectacular technology that can be used to measure this behavior. Back in the day, you would have to have someone get on a bus with a clipboard to measure transit ridership, or place counters on top of the bus doors. But now, think of all the smart cards that we have: When swiped, we can figure out who is getting on where, who is getting off where. And smart cards in some cases can act as a common payment mechanism used across both Uber and public transit: big cities are trying to greenlight letting transit passes also pay for Uber, giving the transit users some flexibility while enabling complementarity instead of pure substitution.

This is where Uber and Lyft have an instrumental role to play. Uber has started to share aggregated data about how long it takes to move someone from Point A to Point B. But we need more. As a city planner or transit planner, you need information about drop off and pick up points, for example. If this information is not publicly available, it needs to be given to cities so that they can plan transit better, understanding flexible demand. Planners, regulators, and city managers, especially, are the ones making decisions about where Uber can expand—how many Ubers are allowed at the airport, for example—and they need to keep this data in mind. If you are a small city trying to make these decisions, this is what you should be asking for from these companies while making agreements.

Yash Babar is an assistant professor in the Department of Operations and Information Management at the Wisconsin School of Business.

business Operations and Information Management
« Back to blog
Back to Top