Cupid Works His Magic at the Wisconsin MBA Program

When Melissa Marousek started the Wisconsin MBA program in 2007 she was expecting to learn, grow, and advance her career, not meet her future husband…but that’s exactly what happened. Melissa graduated from the Wisconsin School of Business in 2009 with an MBA degree and her husband-to-be, Jiri.

“We were both surprised find each other in the program,” Melissa says. “At the time, neither of us was interested in marriage or children, and we were very focused on our careers. We both find it pretty amusing that six years later, here we are married with our first child. If you told either of us this when we met, I don’t think we would have believed it!”

Yet, Melissa and Jiri’s story isn’t as unique as you’d think. Many students in the Full-Time and Evening MBA programs at the Wisconsin School of Business meet future significant others and spouses while working closely with other students on projects or socializing outside of class.

John Ribolzi and Lindsay Klahn first met during their Entrepreneurial Management course in 2007, which was during Lindsay’s second year and John’s first year in the Wisconsin Full-Time MBA program. Although there was immediate interest, it took John four years to ask Lindsay out. Though Lindsay was living in Los Angeles after graduation, when she was home visiting family they would see each other. John asked Lindsay out in October 2011, and they were recently engaged on January 19, 2013. They are planning a wedding for late summer or early fall in 2013.

Because of the lock-step cohort structure of the MBA program and the small class sizes, students have the opportunity to get to know professors, lecturers, and support staff. Ian and Kate Stuart met in 2002 during the first semester of their first year, started dating, and, after getting engaged, asked Mark Matosian, the director of MBA student services at the Wisconsin School of Business, to officiate their wedding. The couple comes from different religious backgrounds and wanted someone to marry them who was meaningful to their relationship, says Kate.

“Mark knew us both. He knew us when we met and dated, he became a good friend, and he represented how we met, in a way, so it made perfect sense for him to officiate,” Kate says. “He did an amazing job.”
The couples featured here all had success stories, but a risk exists in dating someone who is a part of the same close-knit group—it might not work out. When Evening MBA alums Scott and Kelly Goforth first began dating in the spring of 2003, they kept it a secret from their classmates.

“Most of them didn’t find out until six months later, when we showed up to the class Christmas party engaged,” Scott says. “It was only then that we decided to start sitting next to each other in class. Everyone caught on after that.”

Kelly and Amy Schmitz were also aware of the challenges of dating a fellow MBA student when they first started chatting during a class break in fall 2001. Kelly says he recalls reading an MBA magazine article called “The Guide to MBA Dating.”

“I remember the first two rules: 1) Don’t do it, and 2) If you do, it will either fizzle very quickly or take off at the speed of light.” Kelly says. “The explanation was that, as an MBA student, you know what you’re looking for and you will know right away if it will work or not work.”

The advice rang true for Kelly and Amy: they were engaged by March 2002 and married on May 31, 2003. Despite the odds, Kelly and Amy, like the other couples featured, encountered obstacles juggling careers, class, and personal relationships, but said they wouldn’t change anything.

“I have to say that getting a Wisconsin School of Business MBA diploma was great, but meeting Amy was certainly the best part of the program,” Kelly says.

“The MBA program literally changed my life. Had I not enrolled in the program, I may never have met my husband and had two wonderful children,” Amy says. “The degrees we both received have taken us on an extraordinary adventure that we have only just begun.”

Jiri and Melissa Marousek
Married for: almost three years
Child: Jiri Jaxen (age 4 months)
Melissa on the impact of the Wisconsin MBA program: “I definitely expected the MBA program to have a positive impact on my life…but I had no idea how much! While I definitely value my MBA, I am much more thankful for having met my husband in the program. We’ve had an incredible six years together, and we’ve been truly blessed with all that we have.”

Kelly and Amy Schmitz
Married since: May 31, 2003
Children: Isabelle (age 8) and Joey (age 6)
Amy on finding a spouse with similar ambitions: “I think a program [like the Wisconsin MBA] is the best place to meet someone who has the same drive and goals that you do. We were automatic study partners and pushed each other to achieve our goals.” 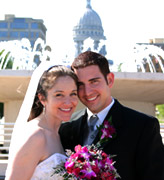 Scott and Kelly Goforth
Married since: 2005
Children: Teagan (age 4) and Tayt (age 2)
First date: lunch at the Weary Traveler and a visit to Vilas Zoo
Scott on applying what they learned in the MBA program to their relationship: “We were able to learn how to work together before we even started dating. Since we had already been on multiple team assignments during the program, we already knew how to be open with each other and provide feedback. We also knew each other’s strengths and what we could bring to the relationship.” 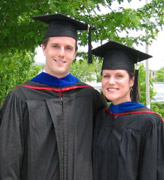 Daniel and Jennifer Pfannenstiel
Married since: May 2, 2009
Children: Nathanial (age 2) and Henry (age 6 months)
Jennifer and Daniel on applying what they learned in the MBA program to everyday life: “When things get stressful at work and at home, we’re pretty good at putting together a ‘strategy’ to help optimize the situation. We’re very good at the divide-and-conquer strategy. We also learned that you have to take time to enjoy life.” 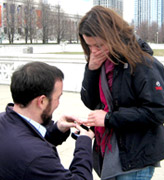 John Ribolzi and Lindsay Klahn
Started dating: October 2011
Engaged: January 19, 2013
John on long-distance relationships: “When we started dating, we lived two thousand miles and two time zones apart, so communication was the foundation of the early part of our relationship…and it remains so today.”

Entrepreneurial Management Wisconsin MBA
« Back to news
Back to Top