Menu
|
|
School News
|
How to Land Your Dream Internship

How to Land Your Dream Internship

Amid a jam-packed schedule of classes, club meetings, and Badger football, attending company information sessions on top of it all can seem nearly impossible. Cam Carey, Wisconsin School of Business senior, can attest that the right session can lead to a dream internship.

Carey—after doing an on-campus interview with Dell last October—worked as an intern at Dell’s headquarters in Austin, Texas this summer. He took his last final on May 16 and jumped in the car for the three-day drive. Carey said he was pleasantly surprised by the similarities between Madison and Austin.

“I thought Texas was going to be tumbleweed city, but not Austin,” Carey said. “Austin is like a larger more metropolitan Madison. It’s a liberal hub in a conservative state. There are three lakes that surround it, just like Madison; it’s just weird how much they have in common.”

Living arrangements were taken care of by Dell; all Carey had to do was bring clothes and toiletries. He said that the most nerve-wrecking part about his journey was meeting his roommate, which turned out to be an unfounded fear.

“My roommate was an undergraduate student in accounting at Texas A&M and very familiar with the Austin area and scene. He had the local knowledge I desperately lacked,” Carey said.

After a long weekend of familiarizing himself with the city, the first day arrived.

“When the clock struck 8:30 a.m., the Dell University Relations Team ushered us into a large conference room with a display of name tags for each of the new interns. I was happy to sport my tag—adorned with the Wisconsin “W”—as the only Badger intern at Dell that summer,” he said. 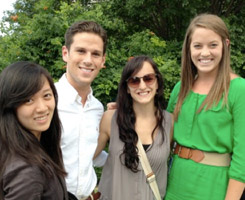 After a few hours going through HR paperwork, payroll procedures, and taking an ID card photo, he was sent to meet his team. Carey was assigned to the Global Assurance and Transformation (GAT) team, the unit of Dell that includes internal audit, controls, business initiative, and fraud deterrence.

“It was an atypical finance role. I was put on the team to create a dashboard prototype that used data-analytics to monitor controls throughout the company,” Carey said. “What we were trying to do was take a normal three-month process that comes with traditional audits to real-time live population.”

Carey quickly learned Dell had a collaborative culture. Within just his first week, he was asked to have multiple one-on-ones with managers, mentors, and previous interns, as well as two lunches where he was able to get to know teammates on a personal level.

“Employees have to opportunity to have a 30-minute meeting with anyone from VPs to fellow interns who are all open to sharing experience, advice, and connections,” Carey said. “I took advantage of the program at least twice a week, even taking the opportunity to meet with Michael Kenney, a vice president of finance.”

Although the internship was what brought Carey to Austin, he didn’t spend all of his time in the office.

“Austin is the only part of Texas that is part of what is called the Hill Country, so it is surrounded by lakes, forests, and hills. It’s like Wisconsin, but hotter,” he described. “The other interns and I took full advantage of our weekends, including going on hikes, spending time on the lakes, and experiencing the nightlife in Austin.”

As he enters his last year of college, Cary offers some internship advice to underclassmen.

Take advantage of your connections

“When it came to the actual recruiting, knowing people within the company is key. Whether it is through an internship or through another contact, it’s incredibly important. Make connections and use them when needed.”

“Although school and academics give you the foundation, the skills you learn on the job are extremely important as well. Take part in business school organizations and initiatives—those were the things that I found most useful during my time at Dell.”

“The majority of the question I had during recruiting this fall was what I did and how I was involved within the school, rather than questions like tell me about a class project or a class you to extremely well in.”

“I took Bulent Paker’s Multinational Finance course the spring after I had chosen to work for Dell—this one of my best college decisions to date. The professor had incredible background experience in both global finance and working in international countries, which came in handy while working with an India-based Dell team. If any student has the opportunity to take classes that might apply directly to work experience, they should take full advantage of it. I cannot tell you how many times my professor’s lessons and life experience came to mind during my time at Dell this summer.”

Finance Internships Students Wisconsin BBA
« Back to news
Back to Top