Sitting on the bench of a Hungarian women’s basketball team, Rebecca Ryan experienced a supreme moment—a Kairos moment, she would call it—when everything changed. We all have such moments—maybe it’s the birth of a child or a phone call that someone you love is terminally ill—when life shifts in one direction or another. It’s what we do with those moments, Ryan argues, that impacts not only our own future, but that of generations to come.

Ryan knows a thing or two about generations, and about time in general. She is, after all, a futurist. With nearly 20 years working in strategic foresight, Ryan has deep insight into generational trends that affect the country on everything from social issues to the economy.

Ryan recently shared her insight, punctuated by her trademark candor and humor, as part of the Wisconsin School of Business’s M. Keith Weikel Leadership Speaker Series. Addressing a group of Wisconsin MBA students, faculty, and staff at the University of Wisconsin–Madison, she challenged the audience to think about how they could become better leaders not just for this moment, but for future generations.

“Whatever you do, put your own statement around that and say that the work you do is going to be for our second and our third generation,” Ryan says. 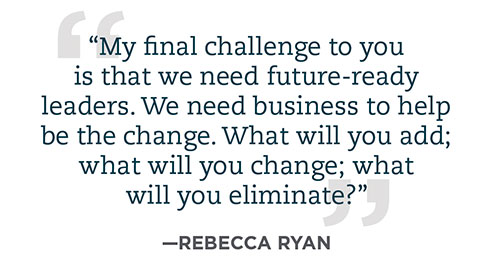 As Ryan thinks about future generations, she sees the United States as emerging from a period of decline that she calls “winter.”

“In America, we go through these seasonal cycles, and I think we are in a wintertime period right now,” observes Ryan. “Winter is a moment when it feels like the walls are getting smaller and smaller. The pressures are getting more and more, and the way we’ve always done things just will not abide. And what is amazing about these wintertime periods is that they’re always a moment to sort of reset, to regenerate, to reconfigure, to rethink how and why things should work.”

According to Ryan, the country is experiencing its fourth winter, triggered by the Great Recession in 2007. The first winter was the American Revolution, the second became the Civil War, and the third winter was the Great Depression.

“We go through these wintertime periods every 80 to about 100 years, and I think you can see that there is a generational stack to this,” Ryan says. “A generation is born during one season, they come of age during the second season, they kind of reach their maturity in the third season, and they reach their elderhood in the fourth season.”

Between now and 2020 when Ryan projects the entire country will move into “spring,” Ryan says we will face decisions about what kind of country we are and what we want to leave for our children. Spring will be a time for growth and expansion, but it demands a long-term view as we push through to the end of winter.

An economist by training and now an author, consultant, and owner of NEXT Generation Consulting, Inc., Ryan describes the future not as a single, static outcome, but as an adaptable unknown that we have the power to shape. She illustrates our ability to impact the future by describing two types of time: Chronos time and Kairos time.

Chronos time refers to chronological time, characterized by Ryan as a horizontal line tracking yesterday, today, and tomorrow. Kairos time describes those supreme moments when everything changes—whether for an individual (e.g., the death of a loved one) or for a country at large (e.g., September 11). These Kairos moments, Ryan asserts, are the moments to recognize as catalytic for shaping the future.

“As you think about leading in any area of business, of course you are going to be pushed on Chronos time,” reflects Ryan. “It is how you are going to live most of your lives—month by month, quarter by quarter, achievement by achievement. But if you can be wise enough to know when the Kairos moment presents itself—an opportunity or a threat that needs to be paid attention to—those are the moments when the universe will bend around you.”

Ryan views the country’s current winter state as a Kairos era. As we transition out of this period over the next decade, she explains a pressing need for people to see things differently. Pointing out that our natural tendency is to set up the world in a way that validates our own viewpoints, Ryan cautions against confirmation bias if we are truly committed to crafting a better future.

All too often, Ryan contends, we rely on our own assumptions and opinions to inform decisions that may or may not be warranted.

“What is interesting about the human mind is that we set our world up to confirm our viewpoints,” says Ryan. “The first thing the CIA does with their cadets, with their new business analysts, is they help them unlearn everything they’ve learned, all of their biases, all of their blinders, all of their creepy, weird filters because true intelligence is something you see clearly.”

She describes a situation when she was working with 125 CEOs and asked them to brainstorm key trends that were going to impact their industries. When she reminded them what a trend really is—objective, observable data that has movement one way or the other—they eliminated 30-50 percent of what they had brainstormed, realizing that much of it was just opinion.

“The fact that our CEOs, who have authoritative power and who have influence to impact the future of their organizations, are dealing primarily with their opinions, not actually trends, means that we all have confirmation bias,” Ryan notes. “So as you are working in your program, I want you to challenge, to question. Is this an opinion or is it a fact? How do I back this up?”

This type of thinking, Ryan says, will help us see things as they really are. From there, we can imagine and impact multiple plausible futures.&nbs
p;

Advice from the bench

As Ryan reflects on how she influences her own future, she leans on her experience playing professional basketball with a team of larger-than-life Hungarian women.

Ryan landed a spot on the team while studying abroad during her junior year in college. But despite having made the team, she found herself spending more time on the bench than on the court.

Ryan charged the audience to remember this advice, as she had, when faced with those Kairos moments where life shifts and the future is yours to direct.