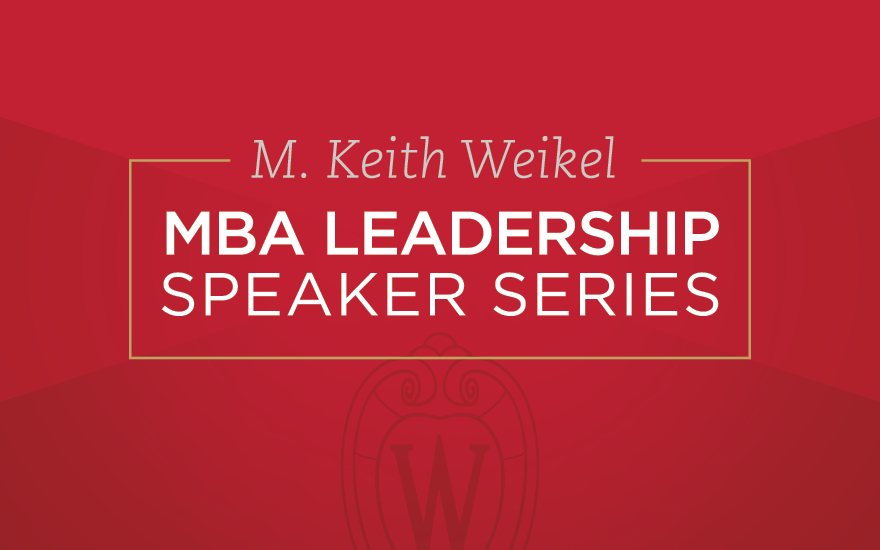 Many people talk about leadership like it’s some lofty philosophy apart from the job, but for Wisconsin Badger and Marine Corps veteran Jake Wood (BBA ‘05), being a leader has always meant having skin in the game.

Wood is the cofounder and CEO of Team Rubicon, a global nonprofit that operates in disaster zones through deploying military veterans and volunteer civilians. Team Rubicon has completed more than 650 operations since its founding in 2010, and numbers more than 120,000 members. While serving in the U.S. Marine Corps, Wood rose to the rank of Sergeant and was awarded multiple commendations. He is a recipient of the 2018 ESPY Awards’ Pat Tillman Award for Courage and was named a CNN Hero. Wood is a Wisconsin School of Business alumnus and played football for the University of Wisconsin–Madison. He is also the author of several books including Once a Warrior (2020).

Our experiences help define us. A native of Bettendorf, Iowa, Wood’s family lived in Europe for a period while he was a kid. One weekend, his parents took the family to a former Nazi concentration camp. Learning about the horror of what happened there made a big impact on him, but so did the story of the camp’s liberation by General Patton’s army in 1945, “men who sailed across the Atlantic to fight for people they’d never met,” Wood says. “That always struck me as a moment of inspiration and certainly shaped me.” Wood went on to serve his country through multiple tours of duty.

Get leadership right. As a leader, doing the right thing doesn’t change like the weather. Wood gets behind a quote from Team Rubicon President Art delaCruz. “He says ‘what’s right is always right, and what’s wrong is never right.’ It’s so black and white, the world. And yet we have this tendency to take these issues that are really issues of virtue and character and make them grey. They’re not. They are black and white.”

Have a bias for action. Back home in the U.S. in 2010, Wood flipped on the TV one day and saw the devastation of the Haiti earthquake. Spurred to action, he reached out to one of the organizations working on the ground and offered his help to the woman on the other end of the line. “She said, ‘Hey, why don’t you just hang up the phone and text us $10?’” Wood put down the phone and within hours had assembled a group of friends and fellow Marines to head to Haiti, the beginnings of what would become Team Rubicon. “It was a motley crew,” he remembers. “We didn’t have much of a plan. We certainly didn’t have many resources. But what we did have was a bias for action, the training and the experience that we brought with us from the Marine Corps and our time overseas, and this deeper desire to help people.”

Learn to harness VUCA. Created by the U.S. military in the 1980s, VUCA is an acronym that stands for “volatility, uncertainty, complexity, ambiguity.” Wood notes that Team Rubicon is essentially an organization that takes volunteers who have just met each other, and drops them into global disaster zones where they must work together as a team—to great results. “What’s interesting about VUCA is they’re each a distinct form of chaos,” Wood says. “Understanding the type of chaos you’re facing helps you identify the tactics for overcoming it.”

Once a Badger, always a Badger. “I’ve had the pleasure of being part of some amazing clubs or communities in my life, whether it’s the Marine Corps, whether it’s Team Rubicon. Every time I travel and I’m wearing a Wisconsin sweatshirt or hat, somebody stops me at the airport: they’re an alum from ’94, 2004, ’74. We always have something in common. It’s a truly special place. Never take it for granted. I will always, always be proud to be a Badger.”

Watch the full talk hosted by the Wisconsin School of Business:

The M. Keith Weikel Leadership Speaker Series at the Wisconsin School of Business enables Wisconsin MBA students to interact with and learn from accomplished business leaders and alumni. Executives from both the private and public sectors are invited to campus to address students.