The Future of Blockchain as Explained to MBA Students 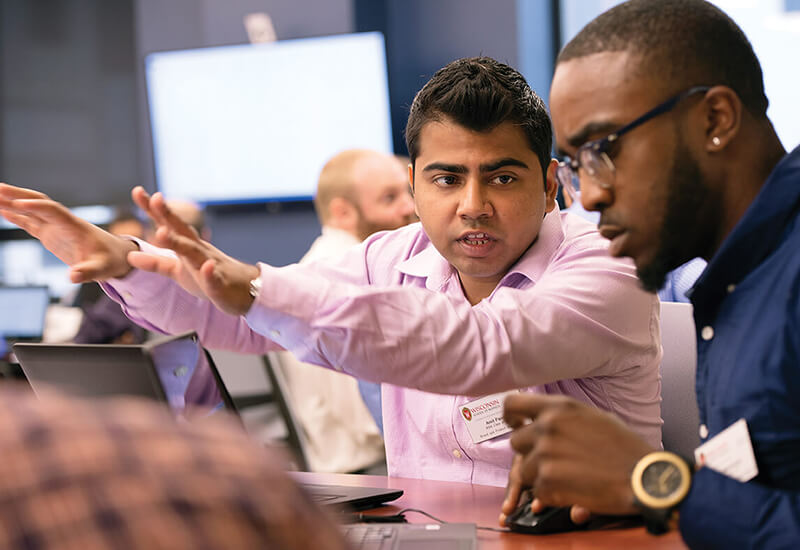 Supply chain leader Kevin O’Marah compares blockchain to when the internet was first surfacing. It could have a massive impact and a massive potential for both innovation and disruption: “It’s one of those technologies that isn’t so much a technology, as it is a completely new way of thinking about how things get organized.”

Spawned from the cryptocurrency world, blockchain is a digital ledger that could be applied to endless business contexts and promotes greater flexibility for consumers. Companies suddenly feel a sense of urgency to adapt their processes for a blockchain future. But, a firm can’t pick up the phone and order a finished blockchain system. “Right now it’s a concept,” O’Marah says. “Everything about it is custom stitch.”

Thanks to an exclusive forum presented by O’Marah and Steve Loehr (B.S., ’88), vice president of global technology services at IBM, students at the Wisconsin School of Business learned about the phenomenon at virtually the same time as the world’s top business executives. The presentation laid out three main ideas to help students understand the far-reaching impact of blockchain.

Understanding the Architecture of Blockchain

Loehr broke down what he calls the essential “architecture” of blockchain, which is comprised of four main dimensions:

How it works is a set of transactions are sent over a framework—a network—composed of open source code with no central database. The digital ledger is visible to all who are permissioned to see it. It’s encrypted, secure, and unalterable, which makes it transparent. Similar to Twitter, Loehr says, the ledger thread or history of transaction is out there; it is visible and can’t be deleted to those who have access.

Using supply chain as an example, Loehr and O’Mahr stated that nearly every procedure between supplier and manufacturer that uses paper can now be replaced by an electronic transaction using blockchain.

This could provide solutions to many supply chain problems:

Preparing for a Blockchain Future

O’Marah says one of the problems for business owners is trying to predict the blockchain curve and debating when to jump in and get involved. The emergence of blockchain is not an “if,” it’s a “when.” He recalls a meeting with a Colgate Palmolive executive who deemed blockchain the most important technology of its time.

For Gregory DeCroix, professor of operations and information management and the academic director of the Grainger Center for Supply Chain Management at the Wisconsin School of Business, O’Marah and Loehr’s visit was representative of the Wisconsin MBA Program’s willingness to go beyond the classroom to give students the most up-to-date industry knowledge.

“It was fantastic to expose our students to this new technology,” says DeCroix. “This was a great example of how we use our applied learning curriculum to expose students to what is relevant to today’s leaders.”

In the fall, University of Wisconsin–Madison students will have the opportunity to further explore blockchain in Cryptocurrencies, a course presented by the Nicholas Center for Corporate Finance and Investment Banking in the Wisconsin School of Business.

« Back to blog
Back to Top